At the Hilton Park Golf Club Professional Shop, we strive to exceed every member and visitor's expectations. Simply put, we love golf and we aspire to look after you and your game.

Every golfer enjoys the game more when they’re hitting good shots and playing well. This is our mission for you.

Maybe, you had too many three-putts as a result of poor distance control? Or did you miss too many fairways to the right meaning you had to chip out sideways? It could be that you play well in practice rounds with your friends but struggle to replicate that in competitions?

Through our experiences in the game and our PGA education, we appreciate that every golfer is different. That’s why we offer a range of lessons and packages to suit everyone. 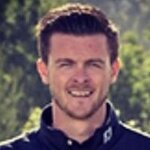 Ewan turned Professional in the Autumn of 2009 and started his PGA career at Cardross Golf Club where he played his last 18 months as an amateur. Winning the Gents Matchplay Club Championship in 2009, as well as representing the club at Junior and Men's level in the McIntyre League and the DGU County at Youth Level. Cardross Golf Club is a private members club based between Dumbarton and Helensburgh in West Dunbartonshire. Ewan was responsible for all general shop duties, junior coaching and the repairs side of the business which to this day he still enjoys greatly. Ewan was the Assistant PGA Professional for Robert Farrell from August 2009 until October 2010. Ewan then made the short journey up the A82 to Loch Lomond to join the Golf Operations Team at The Carrick Resort part of Cameron House Hotel in early October 2010 and work there for the last 10 years. Ewan started as a Year 2 Assistant PGA Professional and was promoted internally once qualified to Assistant Golf Operations Manager to Assistant Head of Golf prior to his final role as Golf Operations Manager which he held from August 2016. As the Golf Operations Manager Ewan managed the day-to-day running of golf operations. He facilitated many aspects of the golf resort business to ensure first class customer service for all of the valued members, residents and visitors. Following a successful career at The Carrick, Ewan joined Hilton Park Golf Club as their Head PGA Professional in April 2021.
Book a Lesson Book a Fitting

Whilst we investigate, please read our page on the email whitelisting and ensure you've added me to your Safe Senders list